In the list of most Hungarian of all Hungarian dishes this Jókai bableves undoubtedly occupies a place of honour. This beautiful, thick soup of smoked pork and beans is named after Hungarian writer Mór Jókai (1825-1904). Not because he had anything to do with its creation, but simply because he loved to eat it. It is being told that Jókai, who loved staying at Lake Balaton, greatly enjoyed this goulashsoup, which is a specialty of the local restaurateurs. 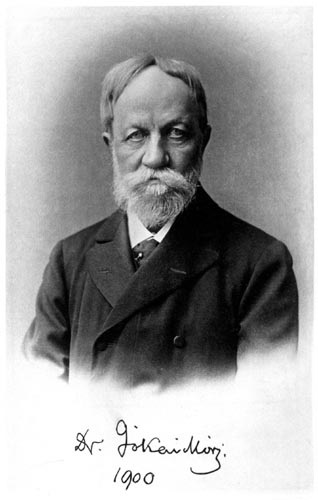 The secret weapon in this goulash soup is the pork knuckle. Slowly cooking the meat results in a rich, flavoursome broth as a basis for this soup. In that broth the white beans, root vegetables and a debrecziner sausage are cooked to a thick, juicy soup, which is seasoned with garlic, bay leaves and -of course- paprika. In this recipe the soup is served with original Hungarian pasta, csipetke. eat it with some bread and a glass of white wine and you’ll be needing nothing else for the rest of the day.

The next day, put the pork knuckle in a large pot and cover it with water. Bring to a boil, reduce the heat and let it very, very gently simmer until it starts getting tender. It will take an hour or two at least. Take your time.

Meanwhile, clean the vegetables and cube them. Slice the sausage and chop the garlic. Add it to the pork, together with the soaked beans, bay leaf and pepper corns. Bring to a boil again and let it simmer on for 1½ hours, until the beans are done, but still firm. Make sure there is enough water in the pot, so keep hot water at hand.

Make the dough for the csipetke.

Remove the pork knuckle from the pot when the beans are done. The meat shopuld be so tender by now that it practically falls off the bone. Remove the bones and cut the meat in pieces. Put them back in the goulash soup.

Chop the onion and sauté in lard (or oil) until translucent. Sprinkle with the flour. Let it cook for a few minutes, so the flour absorbs the fat and browns a litlle. Take it from the fire and sprinkle with paprika and chopped parsley. Stir and quench immediately with a glass of cold water. Stir it well and add it to the soup.

Mix the sour cream into the goulash soup and add the csipetke. Let it boil very gently for another 10 minutes. Meanwhile, cut a green pepper lengthwise, remove the seeds and cut it into thin strips.

Taste the soup on cream, salt and pepper. Put it in plates with a spoon of cream on it and the strips of pepper on it.

Serve this Hungarian bean soup with bread and a glass of half-dry white wine.